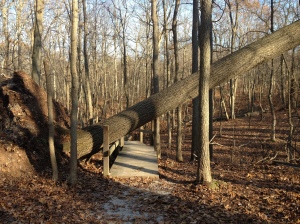 One of the phrases I tend to say a lot to the kids is “Time only goes forward.” Obviously, everybody knows this. But it’s a reminder for many things, among them the fact that it’s good not to dwell too much on things in the past. It’s also a reminder that we need to appreciate what we have in the here and now and not take it for granted, because who knows what tomorrow will bring.

It’s human to look back, to mark anniversaries of important things, to see how far we’ve come from a certain traumatic event and even to lament the swift passage of time. Those of us over the age of 30 shake our heads every year on September 11th, not believing that it’s been 5, 10, 14 years already! In the Northeast at least, that thought is followed by a detailed rehashing of just where we were and how we felt when the Towers came down. Now, as always, it gives me chills.

Another big day for reminiscing in my neck of the woods is today: October 29th. That was the day that Sandy, no longer a hurricane but still a “superstorm,” came ashore in 2012 and decimated sections of coastal New Jersey and the boroughs of New York City. In this age of weather watching as public spectacle and entertainment, the people on TV (dare i call them newscasters?) had been talking about the storm for days. I made sure we were prepared with the typical arsenal of pre-storm items: flashlights, batteries, water. It’s really kind of laughable now. We had no idea.

We live backing onto the woods–a choice we made when looking for houses. I typically prefer nature to people. But when we get storms and we see those huge trees moving in ways they’re clearly not supposed to, it’s a little nerve-wracking. We also have the block’s transformer in our backyard on a pole that’s no sturdier than any other and not protected from the trees around it. Therefore, I knew it was only a matter of when, not if, we’d lose electricity with Sandy.

As the storm closed in on us, I couldn’t tear myself away from the television coverage. Frankly, losing power was a godsend at that point. We actually lost it much earlier than almost everyone else, except for the eight neighbors whose electricity was hooked up through the same transformer in our yard. A branch broke off and fell right into it. When it went, it went down in flames.

Likely, you’ve heard many Sandy stories and seen many images–the most iconic one is surely the Seaside Heights roller coaster sitting, desolate, in the ocean. We never expected to be without power for nine days, that’s for sure. Food was lost, the house got freezing cold, and I was cooking on a borrowed camp stove with two burners outside on the porch. Halloween was cancelled. But who were we to complain when just on the other side of town people lost their homes?

These three years later, I’m left with many, many stories and images. But the ones that I’ll never be able to shake are the school buses being used as barricades in the intersections of major highways (no traffic lights) and the craziness that took over when people couldn’t get the gas they needed for their generators (we didn’t and still don’t have one). Sadly, people fought for gas for generators that were likely being used to power TVs and XBoxes and phones, and not life-and-death appliances like oxygen machines. Our values are seriously skewed.

My overwhelming memory is that humans will do whatever is necessary for survival. One of the reasons I’ve said that I’d never live in Israel is because I adapted to the open presence of guns way too easily. It’s often frightening how adaptable human beings really are. And when paired with an overwhelming desire for survival?

I have no doubt that the breakdown of society is always just a grid burnout away. It would take less time than we could even imagine.

One thought on “Weathering the Storm: Human Adaptability Can Be Frightening”